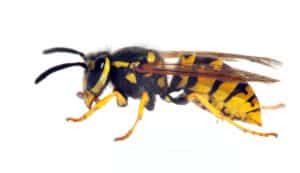 Many warships, fighter planes, and other military machines are named after wasps. These fast-moving bugs strike quickly, strike indiscriminately, and fight tenaciously. These qualities may be admirable in the fighting women and men who protect our homes. But in the case of the winged pests themselves, that’s usually not the case.

When most people see wasps, they want them gone, and gone quickly. At All Solutions Pest Control, that’s what we do best. When our technicians arrive at your home, they quickly assess the situation. Then, they use proven methods which drive wasps away from your home or business and keep them away.

These insects have been harassing people for a very long time. They first appeared in the Jurassic period and can be up to two inches long. There are several different types of wasps in Missouri, including:

·        Yellowjackets: The most common type of wasp is a little like a large and aggressive flying ant. Typically, yellowjackets live in colonies consisting of workers, queens, and soldiers. Workers collect food, queens lay eggs, and soldiers defend the nest. If you see wasps in the late winter or early spring, they are probably yellowjackets.

·        Mud Daubers: These wasps are very common as well. They live in those mud nests which are suspended from eaves and overhangs. These insects rarely sting even if threatened. Instead, they generally fly away. But nevertheless, they are still big and scary.

·        Bald-Faced Hornets: These solid black wasps are nasty. They squirt venom at children or anybody else who approach the nest. Bald-faced hornet colonies may contain up to 400 worker wasps. The good news is that, when they are not threatening your family, bald-faced hornets feed on other troublesome insects.

·        Paper Wasps: These brownish wasps live in umbrella-shaped nests made mostly from brush and twigs. They are not very aggressive. However, if they do sting you, they pack quite a wallop.

The type of infestation normally determines the type of treatment our technicians apply.

Like most other insects, wasps crave food, moisture, and shelter. So, they are likely to nest in places they can find all three of these things.

Most wasps eat sugar. That could be the nectar in flowers, or it could be tiny crumbs of food or small spills left over from your last picnic. A tiny amount of sugar can fuel and entire colony for a very long time. Wasps also need moisture, mostly to build their nests. A little mud or a bit of standing water is about all the moisture they need. Finally, wasps like to nest in sheltered areas. They do not necessarily like to be around people, but that’s usually the way it works out.

Given all these needs and preferences, wasps often nest in places like:

Wasps typically do not attack unless they feel threatened. Unfortunately, pretty much anything is threatening to a wasp. Coming anywhere close to the nest, perhaps out of curiosity, is a threat. Running away from a wasp or a nest is also a threat.

Unlike certain types of spiders and other insects, wasps can sting multiple times. The stings are quite painful, especially for children. Moreover, many people have strong allergic reactions to wasp venom. In many cases, these reactions are life-threatening.

Getting Rid of Wasps

Common over-the-counter pesticides can take care of isolated wasps. Be sure you spray at the wasp instead of creating a chemical cloud and hoping that the wasp flies through the cloud. If you are really fast, a flyswatter might work as well. But if you miss, you will have a very angry wasp to deal with. Knocking down a nest is usually a bad idea as well. If you do it wrong, there can be dire consequences.

At All Solutions Pest Control, we usually take a multi-point approach. Our methods involve:

·        Inspecting your property and determining the proper course of action,

·        Documenting our findings and making recommendations based on these findings,

·        Modifying the environment as necessary to prevent infestation (e.g. moving the picnic table further from the house),

·        Remove the nest if within reach or accessible outside.

Wasps are hearty insects. Even if conditions are not perfect, they will probably come back. So, our recommendation usually includes quarterly retreatments.

If you see one wasp in your house or yard, there is probably a nest nearby. So, call All Solutions Pest Control, and we’ll take care of the problem.

Get a Free Estimate!